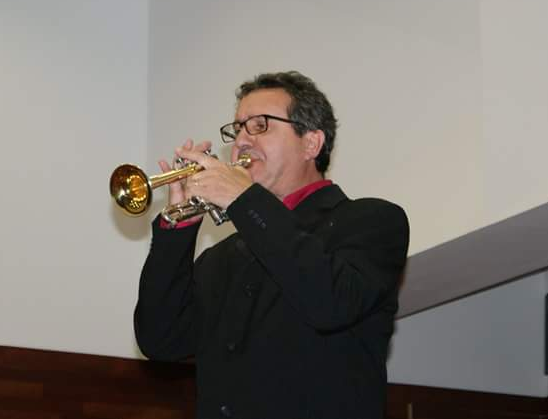 From 04. to 06.04.2022 a staff training with Ricardo J. Ortega Sansaloni, professor for trumpet at the conservatory “Joaquín Rodrigo”, Valencia, will take place within the framework of the Erasmus exchange programme.

Born in Sueca (Valencia) in 1965. He began his music studies at the school of the Sueca Musical Union Society to continue studies with Vicente Prats at the Superior Conservatory of Music of Valencia, where he received classes, among others, from teachers Matilde Salvador, Salvador Seguí, Pascual Camps, L.Blanes and Eduardo Cifre.

He later expanded his knowledge of technique and interpretation with Leopoldo Vidal to continue with José Ortí at the Superior Conservatory of Music in Madrid, finishing in Zaragoza with Angel Millán, where he obtained the Superior Professor of Trumpet, Bugles and Alto Saxhorn group.

At the age of 19 he got the position as a trumpet player in the Military music band of the Spanish army.

He became Professor of Music and Performing Arts in the specialty of trumpet in 1990, as well as Musical Computers, Instrumental Ensemble and Orchestra, at the Music Conservatories of Sabiñánigo (Huesca), Ontinyent (Valencia), Cullera and Oliva.

Throughout his professional career he has expanded studies, among others, of musical analysis, orchestra and choir conducting, pedagogy, alternative techniques: Alexander Technique, Martenot, Coaching, body techniques, teaching-learning styles, general didactics and musical instruments, with renowned specialists such as John Miller or Yuri Ussov.

He has a University Diploma in Advanced Studies in Educational Sciences in Pedagogy, Special Didactics and New Technologies.

He is the author of the manual “Strategies to warm up with the trumpet: The Warmup” (Madrid, Vivelibro, 2017) which starts from the need to classify and organize the different aspects of warm-up with the trumpet, after overcoming physical problems that made instrumental practice difficult. He is also co-author of specialized books, in addition to several articles on specialized pedagogy.

He has taught courses dedicated to wind-brass players and to the retraining of music teachers on various aspects of the curricular development of Music and New Technologies teachings.

As a musical arranger and transcriber, he has recovered and reissued, among others, by Maestro José Serrano, and several compositions and the transcription for wind-band and choirs, and brass ensembles.

He has participated as a conductor and performer in different musical groups of all genres, participating in record and audiovisual performances, and winning state awards.

He currently alternates his pedagogical facet with the interpretive one, as a member of the group Quartega’s Brass and as a freelance musician.

In 2015 he auditioned for Professor of Trumpet for the Higher Conservatories of Spain, being able to choose the position at the “Joaquín Rodrigo” Higher Conservatory of Music in Valencia, which he has held since 2016.